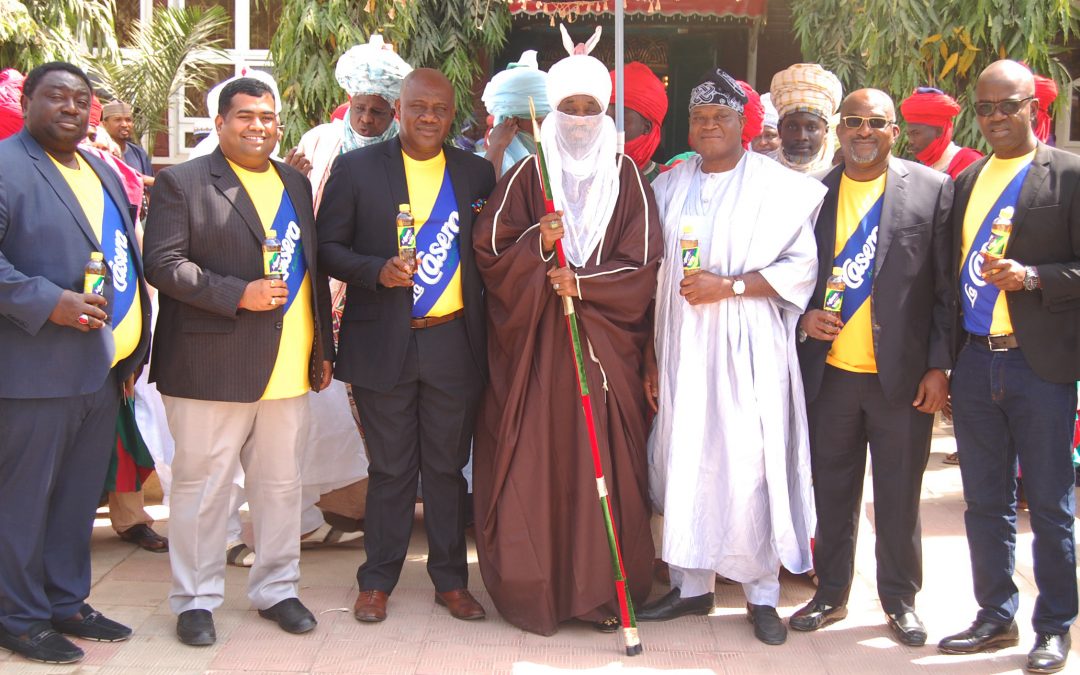 In today’s world of cut throat competition, it is refreshing to see companies still investing in peoples’ lives while driving growth. This conviction was put forward when the management of The La Casera Company (TLCC), makers of leading premium apple soft drink, La Casera Apple drink paid a courtesy visit to the Emir of Kano, His Highness, Muhammadu Sanusi II, at the his palace recently during a visit to the state for the grand draw of its ongoing consumer promo.

In his address, Managing Director TLCC, Mr Chinedum Okereke, thanked the Emir for the rare privilege of such a historical visit.
He highlighted the pedigree of the company, which houses household brand names such as La Casera Apple drink, Smoov Chapman, Nirvana range of products and Bold Bitter lemon along with the newly introduced variants that form the Bold Franchise.

Chinedum while outlining the company’s contributions in building the nation and the economy through employments, said: ‘We employ over 1,000 people directly in our company operations and over 10,000 people indirectly across the country. We equally have close to 2,000 direct dealers handling our products, as well as several vendors in our value chain.’

The La Casera Company which holds the historical city of Kano as a key location for its business, in 2019, carried out a multi-platform educational enlightenment campaign against the ills of substance abuse, targeted at the youth.

The Emir in his remarks, underscored the significance and relevance of Kano not just as a major market for products but also as a strategic point through which goods travel to the whole of West Africa. He expressed his desire for Kano to develop further beyond a consuming market into a production and manufacturing hub. He stressed that this was the only way to curb the social problems that bedevilled youth in the region.

His Highness, Muhammadu Sanusi II, while speaking also advocated for more investment in agriculture and manufacturing, urging The La Casera Company to have a strategic plan to put more infrastructure on ground in Kano, even as their business continues to expand.

After leaving the Emir’s palace, the TLCC team headed for the Vesico-vaginal Fistula (VVF) Kwali Rehabilitation Centre, where they made the donation of 3.5KVA solar power equipment to the centre, after identifying water and power as the major challenges faced by its inhabitants. The solar panels will provide electricity and help to power the water pump in the hostel.

Hauwa Bello Umar, who is the Officer-in-charge at the centre, thanked TLCC for providing succour to the centre inhabitants who have already been through their own ordeals.

The La Casera Company continues to demonstrate that it is a business that looks beyond profit, by positioning the consumer at the centre of its business and also ensuring it makes the world a better place.